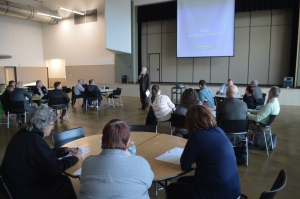 On May 7, the ad hoc committee studying the Franklin Pierce School District facilities needs finalized a list of ranked needs to present to the school board. In a crafted proposal they will present at the next board meeting, they proposed many capital projects greatly needed in the district. The proposal is dubbed FPS 2030.

The committee met 5 times this year to review and rank the needs. Using new cell phone technology in some meetings, they voted by texting their responses during the meeting to accumulate consensus. Attendees watched as the statistics changed magically on the screen before them.

The committee as well as the community were polled during this period. A striking and pleasing result was the both groups independently reached nearly identical opinions about the highest priority needs in the district.  Among the greatest needs was increasing the Science Technology Engineering and Math (called STEM) instructional capabilities. Upgrades to classrooms will enhance the teaching of these subjects and STEM labs will be created in the High Schools.

Also high on the list were replacements of several elementary schools; they include Brookdale, Central Avenue, Collins, James Sales and Harvard. A difference between the community and committee was the ranking of the stadium improvements. It was noted the community survey didn’t full express the improvements were about sizemic upgrades. The stadium needs to be brought up to code for earthquake standards.

Capital improvements in a school district are big dollar bond issues. The difference they make on the students staff and learning improvements are spectacular. In the Bethel District, after years of bond failures the passage of the 2006 bond rebuilt older schools with new wiring to accommodate technology and enhance the learning environment. It also brought construction jobs to the local area at a difficult period in the economy and helped the area stabilize through that period. The mood improvement helped bring a great deal of pride in student achievement. The Franklin Pierce District deserves these capital improvements and the chance to bring that pride in student achievement to their communities.

After the board approves this proposal, they will place the Capital Bond proposal on the ballot for local voters to approve. Here’s hoping the opportunity to boost their school district to a new level of student achieve is an idea not lost on the voting public. Best of luck Franklin Pierce. You have worked hard to bring minds together on the district needs this year. Your next generation will benefit greatly from the effort.

Here is a link to the district’s proposal.