[Item taken from the Pierce County Frederickson Community Plan webpage.]
[Editor Note: Frederickson has a LUAC meeting on January 27, 2020 at 7 p.m. in the Bethel Learning Center – this is a MUST read for anyone in the Bethel School District area. It includes a county incorporation push paragraph!]

PIERCE COUNTY — Frederickson’s population has tripled in the past 25 years. This population growth has also included new businesses and housing developments.

Since the original Community Plan was adopted in 2003, a commercial center at 176th Street East and Canyon Road East has developed to serve the rapidly growing residential population and the industrial center. This center continues to grow. Major improvements to Canyon Road East, south of State Route 512, were completed to improve freight mobility and connectivity for residents.

Descriptions of the proposed changes to the Frederickson Community Plan are listed below by section. The proposed updates include other topics, such as the history of the plan area and information about demographics, development patterns and the environment.

Much of the existing zoning along the 176th Street East and Canyon Road East corridors is proposed to change to new Centers and Corridors zones.

The area around the intersection of 176th Street East and Canyon Road East is proposed to be designated as a Towne Center, which would continue its development as a central gathering place for the community to access services and amenities. This proposed change would also allow additional housing options such as apartments and townhomes.

The east side of Canyon Road East between 160th Street East and the Towne Center would be rezoned Employment Corridor, allowing office and industrial uses.

The following areas would be rezoned Neighborhood Corridor, a mixed residential zone:

Community Character and Design—Frederickson
Standards for buildings and site design—such as architectural features and landscaping—will stay the same in the Frederickson area. However, zones that fall within the Centers & Corridors area would be subject to new design standards.

The current standards that require additional amenities, such as street trees and special landscaping near the 176th Street East and Canyon Road East intersection, will apply within the proposed Towne Center.

Economic Development—Frederickson
The Community Plan update proposes making Frederickson a potential incorporation area. An incorporation effort would need to be led by the people who live in Frederickson, and a majority of the population in the area would have to vote in support.

The facilities and services chapter includes discussion and policies related to those services desired by the community, such as schools, law enforcement and sewers. The most significant changes to the policies are related to parks.

The recommendations support the development of Cross Park between 176th Street E and Military Road East, west of Canyon Road East. Development of this park is expected to begin soon.

The plan supports the acquisition of additional areas to serve the recreational needs of the community. Acquisition of new park properties could be paid for by the newly-adopted Park Impact Fee.

These policies call on the County to: 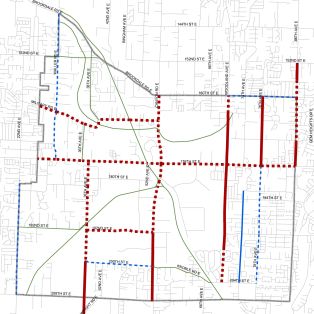 The updates also include a list of transportation project priorities. The highest priority projects are listed below.