If you study the history of Pierce County Washington, you have to recognize the competition between American Settlers and British Settlers in the area.

The British settlers were aided by the presence of Fort Nisqually, their general store and 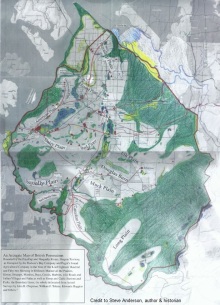 purveyor of supplies and utensils to get started in this wilderness. Americans were reprimanded by peer pressure if they sought goods from the Fort. The town of Steilacoom was the main source of American supplies and the seat of government for U.S. interests.
During that time, Doctor William Fraser Tolmie, as the Factor in charge of Fort Nisqually as the cheif communicator for the Hudson Bay Company (HBC) and British interests locally. He wrote a considerable number of letters to settlers, officials and other British comrades. Many of those have been sitting in archives and not accessable to the average reader.
Historian, artist and author Steven Anderson, a University Place native, who formerly directed the Fort Nisqually site at Point Defiance Park for 10 years, has reached into those archives and started compiling those letters. Anderson currently resides in North Carolina.
Letters of Doctor William Fraser Tolmie from 1853 to 1855 will be in a book coming out next year. It is estimated to be about 400 pages, much larger than you average read. The information in these letters sheds a great deal of light into the power of the British and the Hudson Bay Company in the Pacific Northwest.
July 28, 2018, Steven Anderson joined with Jerry Ransey, Author of Stealing Puget Sound. Together they did a presentation at Dupont City Hall about this early history, the letters and the upcoming book.
This link is a video of the hour long presentation. It is fascinating to hear what they know about the interactions of the two sides before the Pig War and the final resolution of the Canadian Boundary.