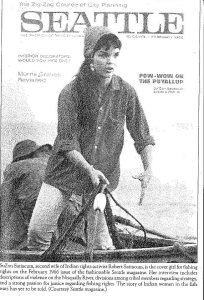 Washington, will hold An Evening With SuZanne Satiacum. Mrs. Satiacum was a participant in the tribal fishing rights battles of the 1960’s and 70’s. She has many fascinating stories to share from first-hand experience with the challenges, confrontations, and violence that occurred in that era. Aside from a guest appearance on her son’s radio show a few years ago, this is her first time recounting events publicly. SuZanne Satiacum was featured in a photo on the front of Seattle Magazine in February 1966, fishing in Puget Sound.

The indigenous population of Washington State subsisted on fish, seafood, game and native plants since people existed in the region. Explorers to the area in the late 1700’s and early 1800’s brought settlers, mostly American and British in the Puget Sound Region. In 1846 a treaty was struck and the British moved northward to Canada. In 1853, the first Governor of Washington Territory was also tasked by the Federal Government with creating Treaties with the populations or tribes of Native Americans around the region as Superintendent of Indian Affairs.

American settlers put up fences and claimed property. Knowing the Native Americans  would not readily recognize the practice, the government felt it was important to limit them to reservations to facilitate land ownership in the region.

The first of the treaties signed was The Medicine Creek Treaty in December 1854. In these treaties, the tribes ceded most of their lands, but retained the right to fish at “all usual and accustomed fishing places… in common with citizens.”

Tribal members and landowners often were at odds regarding how to access these fishing places. Conflicts erupted In the 1960’s the Survival of the American Indian Society (SAIA) was formed and more formal protests of fishing rights began taking shape. These fish-ins had some notorious and well-known participants. In a 1964 protest, Marlon Brando was photographed protesting with Puyallup’s Robert Satiacum, with whom it was not uncommon to protest with celebrity supporters. 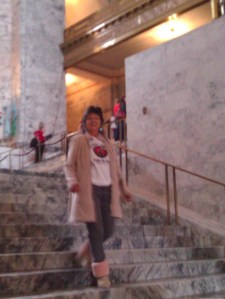 Washington State’s Fish and Game authorities often had confrontations with local native fishermen and women. Many of these turned violent, fights and gunshots were not uncommon.

The landmark case, the U.S v. Washington ended with the ruling in 1974, known as the Boldt Decision. It put a stop to most of the violence, but wrangling with local anglers and commercial fishing has continued in different forms.

SuZanne Satiacum is certain to captivate you with her stories. For anyone with a strong interest in local history, it’s a must.

Aho! Best wishes for a grand evening of storytelling!