[Editor Note: This is the email I sent with photographs to Councilman McCune’s office on Thursday, October 25, 2018.]

Initially permits were obtained for a lumbermill. Somewhere between daunting requirements for approval and alternate locations, they decided against siting a lumbermill.

Now in 2018, SPI changed plans and started excavating the property. The neighbors went up in arms because there was a Federal Wetland overlay that was not addressed properly from what we know of these projects. Trying to discuss this with PALS officials has frustrated some of us. Several have accused us of picking a fight with them. Honestly, we know our neighborhood and are certain what is being done will absolutely be a problem.

Enter the realization that for the different development no stormwater permit was obtained and the official yellow sign is up. The stormwater review is supposed to be done at the time of year when the stormwater is at its peak. Generally, in western Washington, that is March. So there should be some waiting for that one.

But, the developers have excavated out the typical stormwater path north of 208th Street. The mitigation ponds are not completed on the south and the place where the water crosses 208th Street, where it is common for 208th Street to flood, has nowhere left for water to flow to.

I know I have heard you say that stormwater runoff does not constitute a wetland, but I beg to differ. If an area regularly floods and runs off toward a water way like Stony Lake or Clover Creek, then it is part of a cycle that is seriously valuable to local salmon habitat. It is when the rains start in September that many salmon head up the rivers and creek to reach their spawning habitat. There are other times of the year for other salmon species.

So my response is – storm water doesn’t constitute a wetland? Tell that to a spawning salmon!

There have been multiple places in mid-county over the years the country has started chopping up the annual rainfall (storm water) from getting to Clover Creek. 22nd Avenue was a healthy pathway for runoff that included several species of ducks including “shovelers” and geese, including a brief pass through of the white trumpeter swans. Multiple development changes in the past 50 years have completely obliterated this water way and now there is a network of ponds and adulterated water pathways to take the flow away from its path through Stony Lake and on to Clover Creek. (And I know of sticklebacks that were in the creek too) The building up of 192nd Street cut off the tail of Stony Lake that used to connect to “Frederickson Lake” in high water years. It is no wonder there are water flow issues in Clover Creek. The long culvert under McChord Field, is, of course, a major issue as well. Two of the dozer operator that moved the wetland to build the field were Clarence Byerley and John Thun, people I spoke with about the project years ago, as they were neighbors and friends of my family.

I have maps of the Pierce County wetlands from the Hudson Bay land claim from the mis-1800’s. Recently Steve Anderson, a University Place historian of the HBC years, created a map that overlayed that old HBC claim map onto a satellite photo. This more clearly shows that major water flows in the middle of Pierce County, the same area where the sole source aquifer (SSA) resides.

Circling back to the matter at hand, this water crossing at 208th is a mess and the entire community is aware of the debacle is poses. They shake their heads as they drive by. Some post on Facebook of their concerns. A few are taking photos. Not many actually take the initiative to call or write the county and warn you this is really screwed up. The 2 PALS staff that visited the Frederickson Clover Creek Community Council meeting a couple months ago were not willing to delve into it. They were also very defensive (downright testy) about it.

The bottom line is, the location is flooding now. The water is backing up an forming a huge puddle on the north side of the road. The developers have deployed massive pumps and sucking the water out (as we laugh at them). Pumps cannot be the solution. If there is delineation or mitigation that needs to be observed by a licensed hydrologist, the pumping is merely disguising the depth and breadth of the problem. It needs attention and careful consideration of a solution. It has been irretrievably screwed up. Now we need to carefully evaluate how to fix this in some way. Otherwise by March, we are going to have a Lake Sierra Pacific and a closed road.

It is unfortunate we did not see this DNS at all before the 14 days from October 8th had expired. We are betting you are going to find out it IS significant. Good luck with that. Happy flooding.

P.S. I grew up nearby at Shady Acres Airport. 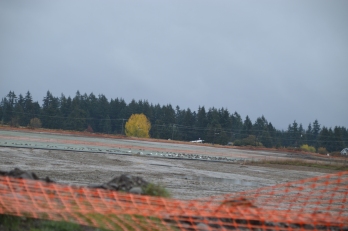 The Lake forming North of 208th